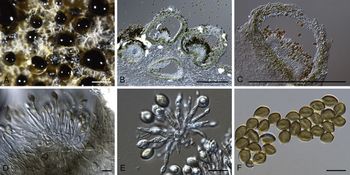 This genus contains around 25 species of plant pathogenic fungi and saprobes. Symptoms include leaf spots, leaf curling, dieback, blights and cankers. Several are of agricultural significance like Coniella granati which causes rots and blights on pomegranate and other trees.

Anamorphic forms have been often described under the genus Pilidiella and related genera.