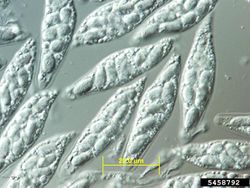 The Diaporthales are a large order of fungi containing more than 2000 species, including the large family Diaporthaceae with many important plant pathogenic species. Other forms may be saprobes or endophytes. Like other orders under the class Sordariomycetes, the Diaporthales produce sexual asci in perithecial fruiting bodies. These perithecia have an elongate beak and are often formed within the stroma. The asci have a characteristic apical annulus.

For a taxonomic review of the Diaporthales and its families see Rossman et al., 2007 as well as Senanayake et al., 2017.

Note:
This page only deals with plant pathogenic species, for beneficial groups of Diaporthales see:

The following genera and individual species are currently entered under Diaporthales: