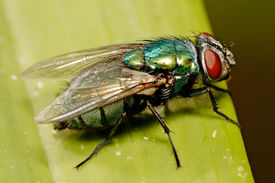 This family contains more than 1,000 species of flies which are mainly saprophagous. They breed in dung, other decaying organic matter and carrion. Most fly larvae found in dung will belong to this family. Several species are also pests of stored meat and other animal products or are beneficials which prey on or parasitize insect pests (see below).

However, the family also includes various veterinary and nuisance pests found in houses and stables. Some species (e.g. the Australian sheep blowfly or the old world screw-worm) invade wounds, causing secondary myiasis in animals and sometimes in humans. This group is treated here.

Typically, the adult flies have a shiny, metallic colour of green, blue or black. The distinguishing morphological characters of the family are the wing venation, the structure of the antenna and a row of bristles on the meron (a part of the thorax above and between the middle and hind coxae).

Note:
This page deals only with veterinary and medical species. For other groups see: