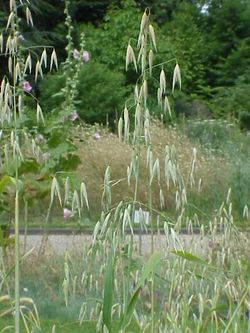 The species is one of the most serious weeds of temperate cereal growing regions, especially in oat and wheat crops which are weak competitors. It can cause yield losses of more than 50% if it emerges early and lowers the quality of the harvest. In addition, wild oats become infected with and promote cereal diseases like Heterodera avenae or Fusarium graminearum. The weed is considered to be native to Europe and Asia. It has spread to North America in the mid 19th century and has also become a serious problem in Australia.

A. fatua is difficult to control and often resistant to herbicides. The main management strategies are the use of uncontaminated seed, cultivation during emergence of the weed and burning of residues after harvest.

In seedlings, the emerging leaf is rolled. The leaves turn anticlockwise (in contrast to wheat and barley) and young leaves have a bluish colour. The ligule is large (4-6 mm) and there are no auricles. The plant grows to a height of 1½ m and resembles and hybridizes with cultivated oat. However, its florets do not remain attached to the plant. Its seeds are difficult to differentiate from cultivated oats and from Avena sterilis.

For details see the reviews in the BugwoodWiki and by Beckie et al., 2012.