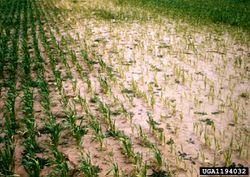 The species is wide-spread and damages cereals like wheat, barley and oat. Infested roots swell and show deformations as well as extensive branching. The attacked roots later die off and become black. Often other root pathogens invade the infested roots. Above ground symptoms include stunting, yellowing and uneven, patchy growth of the plants. Yield losses of 20-50%, sometimes more, have been reported. A yield reduction of 50% is typically caused by a pre-harvest density of around 5,000 eggs and juveniles per 100 g of soil.

Cysts can survive in the soil for several years. The eggs usually hatch in spring and the 2nd stage juveniles penetrate the tips of fine roots. They stimulate the roots to form large feeding structures (syncytia) through the merger of cells. Males leave the roots again after completing their development. They are about 1 mm long at maturity and search for females attached to the roots. Females swell with part of their body protruding from the root. They become lemon-shaped, durable cysts, around ½-1 mm large which are completely filled with eggs. The cysts are initially white but later become dark brown.

Water and soil, contaminated with cysts can spread the nematode to other fields. Management involves crop rotation with non-cereals and planting of resistant or tolerant cultivars.

H. avenae has a similar biology to Heterodera filipjevi and Heterodera latipons. All three species form the cereal cyst nematode complex. H. avenae is the most widespread species of this group and on average the most damaging one. Morphologically, the group is characterized by the shape of the vuval area of the cysts on the terminal cone. In H. avenae the semi-fenestrae are close together.