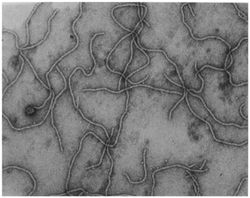 This genus contains plant viruses which, among others, infect grapevine, cherry and plum trees as well as pineapple. Often the phloem is affected. The symptoms include chlorosis, necrosis, leaf distortion and wilting. They are transmitted by pseudococcid and coccid mealybugs, as well as scale insects.

The particles are very long, 1000-2200 nm, and contain linear, single-stranded and positive-sensed RNA, with a size of around 17-18 kb. The name of the genus refers to grapevine as a frequent host (ampelos = grapevine in Greek).