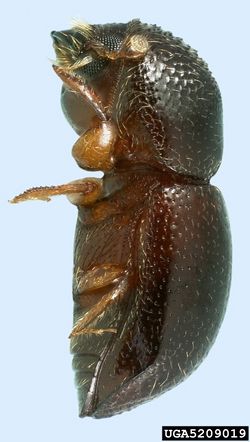 This genus of twig and shot-hole borers contains around 50 species, including several invasive ones. Some species are regarded as ambrosia beetles and carry symbiotic fungi which they feed on. Economically important species are, for example, Xylosandrus germanus and Xylosandrus crassiusculus.

The female adults are between 1 and 2 mm long. Males are much smaller, flightless and rarely seen outside the galleries. The species of this genus are similar to those of Xyleborus, but can be recognized by the widely separated procoxae and the compact body. The elytra are usually slightly longer than the pronotum. They have a distinct, unarmed declivity or curve gradually towards their tips.