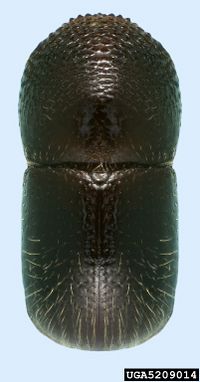 This beetle is native to south-east Asia but is now widely distributed. It breeds in the branches of various trees (e.g. coffee or cacao), resulting in death of the twigs. In Uganda, the beetle was first recorded in 1993 and has spread quickly through the country, infesting mainly coffee plantations. Surveys between 2010 and 2015 found around 40% of the coffee trees infested, resulting in an estimated annual export loss of about US$ 40 millions (Bukomeko et al., 2018).

The recommended control methods of removing and burning infested twigs are very labour-intensive. Only the females attack trees and the males are flightless. The life cycle lasts around one months. The adult female is around 1½-2 mm long and shiny black. The males are smaller and light brown.

For reviews see Greco and Wright, 2015 and the respective page in BugwoodWiki.