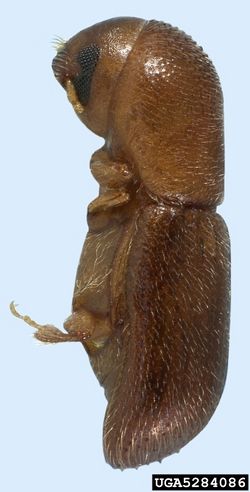 The genus Xyleborus contains around 500 species of ambrosia beetles. While most species attack predominantly dead or weakened trees, the genus also includes pest species that attack healthy trees like the invasive Xyleborus glabratus which is native to Asia and has spread to eastern North America.

Unlike the bark beetles, the species of Xyleborus bore through the bark and into the sapwood and heartwood. Ambrosia beetles carry a symbiotic fungus which grows on the walls of the galleries and serves as food for the larvae. See the genus Xylosandrus for another example of ambrosia beetles. In some cases the symbiotic fungus is pathogenic and can kill the host tree.

The adults are 2-5 mm long, brownish to black. Males are often smaller than females and flightless. The end of the elytra can be convex or concave and in some species has spines. The antennae consist of a 5-segmented basal part (funicle) and a 2-segmented club. The posterocoxal process is inflated.

For a review of this and taxonomically related genera see Rabaglia et al., 2006.