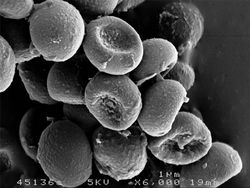 This is an important genus of smut fungi with around 200 species, including various plant pathogens which infect mainly gramineous crops like cereals or grasses. A given species usually infects only a specific crop like maize, oat, barley or sugarcane.

The species infect mainly the inflorescences of plants in the grass family (Poaceae) and form black to brown powdery spores. The name is derived from the Latin word ustilare (to burn). The genus is considered to be polyphyletic based on a combination of molecular and morphological features (see McTaggart et al., 2012 for a taxonomic discussion) and is under revision. For example, the common smut of maize (previously Ustilago maydis) has now been renamed Mycosarcoma maydis (McTaggart et al. 2016).