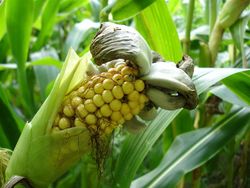 The fungus is found in many maize growing regions and is particular common in the subtropics. Only maize is infected naturally. The fungus can be readily recognized by the tumor-like galls which form at the infection site of the plant (the fungus does not spread systemically in its host). Infected plants are stunted and the disease can cause significant yield losses. Management relies primarily on resistant cultivars. Before the development of such cultivars, yield losses of up to 10% have been estimated in North America.

Infections start with chlorotic lesions which develop initially into small and whitish gray galls. Galls can form on cobs, stalks and leaves, on young plants occasionally also below ground. The galls can grow to a size of up to 30 cm and contain dark brown to black teliospores. These are spherical to egg-shaped, 7-8 µm large and are covered with tiny spines. Eventually the outer surface of the galls ruptures releasing the spores.

It has been estimated that an average-size gall produces more than 200 billion spores. The teliospores disperse by wind and can survive for many years in plant debris or the soil. When they germinate they form a 4 celled basidium which produces haploid, single-celled basidiospores or sporidia. These are yeast-like, saprophytic, not infectious and can multiply by budding. Under certain conditions compatible sporidia mate and form dikaryotic, infectious hyphae which penetrate the host tissue.

M. maydis (as Ustilago maydis) has become a model for the studies on plant pathogenic basidiomycetes. In Mexico, corn smut, called huitlacoche (or Mexican corn truffle), is regarded as a delicacy and is sold for a higher price than corn.