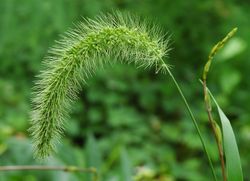 The species is a common and widespread weed in temperate regions, native to Europe and Asia and introduced in the Americas (first record in Canada in 1821). It can become a problem in many crops, in particular maize and soybeans. Yield losses of up to 20% have been reported and are highest if the weed emerges before or together with the crop. It is also very competitive in wheat if it emerges shortly after the crop, with yield losses of up to 10%. In addition, it is an important source of seed contamination in wheat and other cereals, reaching up to 10,000 seeds per kg of cereal. On the other hand, S. viridis is nutritious to livestock, birds and rodents. In Canada, the proportion of infested land was estimated at 20-50% and the weed was found in most fields.

S. viridis is found mainly in open, disturbed areas like abandoned land, roadsides and field margins. It does not grow well in the shade. The plant produces many seeds, 350-450 per head. These are spread by water, birds or by contaminated harvests. They can survive for many years in the soil and germinate from a depth of up to 10 cm. Emergence is normally in the spring. For control, herbicides and deep tillage are used.

The plants grow to a height of up to ½-1 m. The leaves reach a length of up to 30 cm and are up to 1½ cm wide. The ligule is a fringe of hairs, 1½-2 mm long. The leaves of mature plants are smooth on both surfaces, in contrast to Setaria faberi which has small hairs on the upper leaf surface and long hairs at the leaf base. The margin of the leaf sheath also has fine hair. The inflorescences are up to 15 cm long and slightly nodding (distinctly nodding in S. faberi).