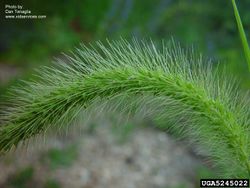 The weed is native to eastern Asia, but has spread to other parts of Asia, Europe and North America (first record in 1923). In North America it is found in the eastern half of the continent as well as in California and Arizona. It is still expanding its range westward. It is particularly a problem in maize and soybean crops in North America. For example, a study showed that maize yield was reduced by about 25% at a density of 17 S. faberi plants per m2. Similar results were obtained with soybeans. 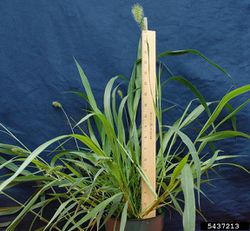 S. faberi is found in different soil types and various environments. It colonizes mainly disturbed, open areas and cannot tolerate shade. The species is usually self-pollinated and disperses through its seeds. Seed production has been estimated at around 10,000 seeds per m2. Seeds persist and remain dormant in the soil for several years. Most seeds cannot germinate from a soil depth of more than 5 cm. Therefore the seed bank can be reduced by regular tillage. Seed dispersal involves water, animals and human activities, like transport of contaminated harvests. Herbicides are used for management, but resistance to several compounds has been reported. Crop rotation and deep tillage are also recommended.

S. faberi can grow up to a height of more than 1 m. The leaves are up to 30 cm long and 2 cm wide, with small hairs covering the upper surface. The ligule is a ring-like tuft of hairs, about 2 mm long and the margin of the leaf sheath also has fine hair. The inflorescence is up to 20 cm long and usually nodding.