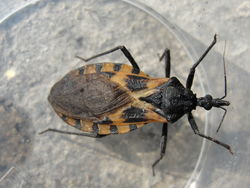 The members of this family are usually insect predators, but the species of the subfamily of Triatominae (kissing bugs) are of medical importance and transmit the Chagas disease. This subfamily contains more than 100 species and is mainly found in America. The members live in and close to the nests of vertebrates which they parasitize. Several species are found in and around houses and are vectors of Trypanosoma cruzi, the causal agent of the Chagas disease. The disease is the American form of trypanosomiasis and is found in parts of South and Central America. It affects around 10 million people, causes chronic heart problems and can lead to heart failure. Transmission occurs through the feces of the bugs when these come in contact with the wound left by the bite.

For the group of beneficial Reduviidae see the page on Reduviidae (predators).

The following genera are currently entered under Reduviidae (medical):