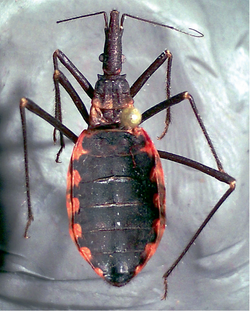 This is a small genus of kissing bugs with 3 species which are restricted to Chile. They are usually medium sized, around 15-20 mm long and feed on wild and domestic animals. They can also bite humans and can be found occasionally inside houses. Mepraia spinolai is a vector of Chagas disease.

Females have always tiny, non-functional wings (micropterous), but males often have normal wings. The genus is closely related to the genus Triatoma. It can be separated from Triatoma by the tiny wings in females, the male genitalia and the males having a variable wing size.