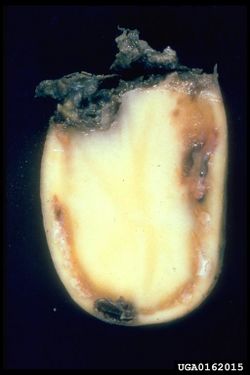 Ralstonia solanacearum, typical brown discoloration of the vascular ring and slime oozing from the infected tissue on a potato tuber. The black necrotic tissue is due to secondary rotting.
Source: Plant Protection Service, Netherlands - IPM Images

Infected fields can rarely be reused, even after rotation with non-host plants. The disease is mainly controlled by the use of resistant and tolerant cultivars. The prevention of spread of the disease has been achieved, in some instances, by the application of strict prophylactic sanitation practices.