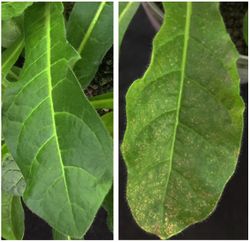 This is a widespread virus, infecting potatoes and related species of Solanum. The symptoms include mottling and rugosity of the leaves, as well as deepening of the veins. The virus is usually transmitted mechanically, e.g. by contact in the field or through tubers. Less often are aphids involved which can transmit it in a non-persistent manner. Yield losses of 10-20% have been reported. Destructive diseases can develop during co-infections with PVY or PVX.

Two forms, PVSA (Andean) and PVSO (ordinary) have been described. The ordinary form is often symptomless. The Andean form is more virulent, causing premature senescence and defoliation, and is more efficiently transmitted by aphids. The facts that infections are often symptomless and that PVS is normally not included in potato seed certification contributes to its world-wide distribution.

The filamentous particles are 650-700 nm long. The RNA genome is about 8.5 kb large and contains 6 open reading frames.