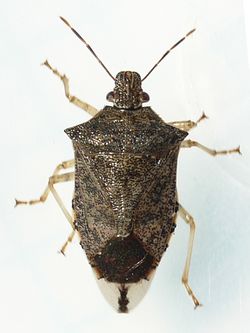 The bug is an omnivore, but predominantly feeds on defoliating insects, e.g. the Colorado potato beetle (Leptinotarsa decemlineata) or the Mexican bean beetle (Epilachna varivestis). However, it also feeds on plants and in case of prey shortage populations can survive by feeding on plants only. P. maculiventris is commercially available and commonly used as a biological control agent against a large variety of pests using augmentative releases.

P. maculiventris is native and common in the Americas but is also used and released in Europe.