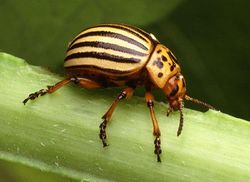 The beetle is an important pest of potatoes, native to North America which has spread to Europe (first records in 1877) and subsequently to northern parts of Asia. It is still a quarantine pest in a number of potato growing countries. It can also damage tomatoes and eggplants. Apparently, its original host plant was Solanum rostratum and it adapted to potato when this crop was introduced into North America. It is believed to have originated from central Mexico and expanded its range to the southern U.S. with the aid of migrating Spanish settlers during the early 17th century.

The beetle and its larvae feed on potato leaves and can cause rapid defoliation. Yield losses of 50% have been estimated. Management involves the use of insecticides, genetically modified (Bt) cultivars, or by crop rotation. Resistance to pesticides has developed in several regions. Developing potato cultivars with resistance to L. decemlineata, combined with other desirable agronomic traits, may be another promising approach in the future.

The development from egg, through 4 larval instars to mature adult lasts around 1-2 months. Pupation takes place in the soil. There are 1-2 generations per year, 3 in warmer regions. The adult overwinters in the ground where it enters diapause. In spring, the adults often fly a long distance from overwintering sites to potato fields.

The larvae are red. The adults are about 10 mm long, yellow or orange-brown in colour, with five dark stripes along each elytrum and dark spots on the pronotum.