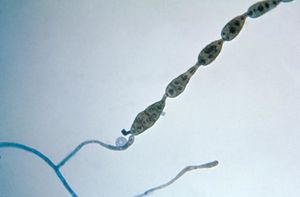 chain of conidia of a species of Alternaria (click on image to enlarge it)
Source: Wikimedia Commons

This order contains more than 150 genera and includes various serious plant pathogens like early blight of potatoes. However, some forms and strains also have antagonistic properties against other fungi and have been studied as possible biological control agents of plant pathogens. This page deals with the latter group. The fruiting bodies (ascomata) are usually spherical with a perithecia-like opening. The asci are bitunicate and the ascospores mostly septate.

The following genera and individual species of antagonists are currently entered under the order Pleosporales: