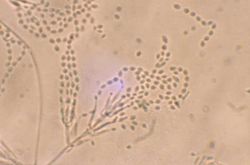 The Ascomycota form sexual fruiting bodies (ascocarps) containing asci and ascospores. It is a large group containing many plant pathogenic species but also important groups of beneficial species, including those which are antagonists of plant pathogens and nematodes.

The following groups of antagonistic Ascomycota are included in the system:

This page deals only with antagonistic species to plant diseases and nematodes, for other groups see:

The following list contains all orders or equivalent groups of antagonistic Ascomycota entered into the system (alternatively, you can of course use the wiki search function):