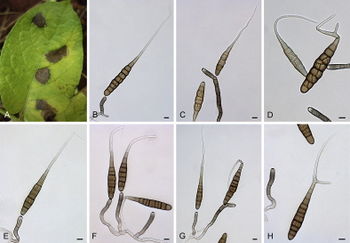 The fungus causes early blight in potatoes and tomatoes, a disease which may also be caused by some other large-spored species of Alternaria like Alternaria protenta. A. solani has a world-wide distribution and can also infect some other crops. The symptoms are usually dark brown to black leaf lesions which often show a target pattern of concentric rings and can be angular. On tomato fruits similar lesions develop. The disease may also cause stem lesions or collar rot on seedlings. It results in defoliation, wilting and significant yield losses. On potato, yield losses of up to 60% have been reported.

Sporulation occurs under warm and moist conditions and the spores disperse through the air and with rain splashes. The fungus enters other plants through stomata or small wounds (potato tubers become infected during harvest). The conidia and the mycelium overwinter in plant debris. Fungicides are mainly used for control. Cultural methods like clearing infected plants from the field are also recommended. Few potato cultivars possess sufficient resistance to this pathogen.

The conidia are club-shaped, dark brown, multi-celled and tapering to a beak, which may be longer than the body. They are around 150–300 µm long (including the beak) and 15–25 µm wide. The species is a member of Alternaria section Porri.