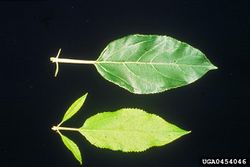 The phytoplasma causes an economically important disease of apple in Europe and some neighbouring countries. Several other host plants are known. Symptoms include witches’-broom appearance of the shoots. Leaves have a reduced blade but enlarged stipules (see illustrations on right and below). Fruits are unmarketable, small (abour 50% of the normal size) and with a blunt taste. In some orchards more than 50% of the apple trees have become infected over the course of several years.

The phytoplasma is located in the phloem of the host plant. During the winter, it concentrates more on the roots, but reinvades the stem and canopy during the spring. It is transmitted by psyllids of the genus Cacopsylla in a persistent and propagative manner. In some surveys, the percentage of psyllids infected with the phytoplasma has exceeded 10%. Healthy trees can also become infected during grafting.

For management, vector control and use of disease-free planting material is recommended. Developing resistant cultivars is in progress. There is also a report of cross-protection with a mild strain of the phytoplasma (Kiss et al., 2013).

Ca. P. mali belongs to the 16SrX-A group. It is approximately 200-800 nm large. The reference strain is AP15R. The genome has a linear organization in contrast to other phytoplasma strain studied and its size has been determined to be 602 kb for strain AT. It codes for 536 genes. Ca. P. mali is related to Ca. P. pyri (subgroup 16SrX-C) and Ca. P. prunorum (subgroup 16SrX-F).