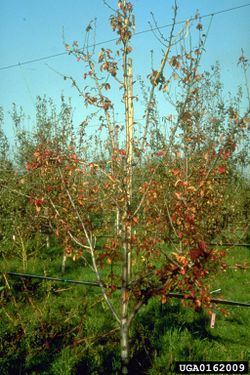 This phytoplasma causes an important disease of pear in Europe, Asia and the Americas. Other hosts are apple, Prunus species like peach (peach yellow leaf roll) and various other plants. The symptoms include leaf chlorosis, leaf curling and midrib thickening. In autumn, infected trees show characteristic early leaf colouring or reddening, premature leaf drop, as well as poor growth and pale foliage in spring. Infected trees may die.

The phytoplasma is transmitted by the Cacopsylla species C. pyri and C. pyricola. A high percentage of these psyllids might carry the phytoplasma. Taxonomically the phytoplasma belongs to the apple proliferation group (16SrX-C subgroup). The reference strain is PD1R.