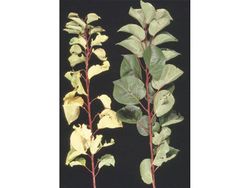 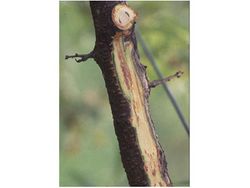 The phytoplasma induces apricot chlorotic leaf roll, leptonecrosis, Japanese plum decline and other diseases of Prunus crops in Europe and neighbouring countries. The symptoms include chlorosis, tree decline or die-back as well as disorders like early bud break and leaf rolling.

It is transmitted through planting material and the psyllid Cacopsylla pruni. Resistance of host plants to the disease varies and several strains of the phytoplasma have been described. Cases of recovery from infections have been also reported. Management relies mainly on the control of the vector. The development of resistant cultivars is in progress.

The phytoplasma has been assigned to subgroup F of the 16SrX phytoplasma group. The reference strain is ESFY-G1R.