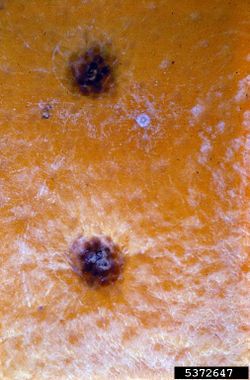 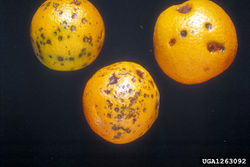 The fungus causes citrus black spot and has been mainly a problem in the southern hemisphere (South Africa, Australia and South America). However, it was discovered in southern Florida, U.S.A. in 2010, where attempts are underway to prevent its spread to other parts of Florida. The disease causes severe fruit spotting and fruit drop. Infected fruits are unmarketable as fresh fruits.

The fungus reproduced sexually, forming ascospores in pseudothecia in the leaf litter. These are released under moist conditions and spread through the air. Asexual reproduction involves the formation of conidia in pycnidia in the fruit lesions or on twigs which mainly spread by rain splashes. The disease is managed by removing leaf litter, early fruit harvesting and the use of fungicides.