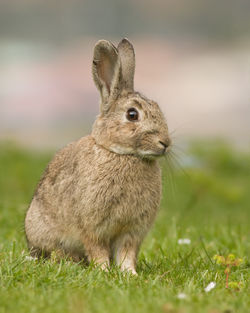 The original distribution is the Iberian Peninsula and surrounding areas. It has spread to or was introduced into most parts of Europe, Australia, New Zealand and various other countries and islands. The diet consists of all types of vegetation, including field crops. Feeding on roots, seedlings and the buds of various crops can cause economic damage. It also damages the bark of trees in the winter and can be a problem in tree nurseries. In Australia, rabbit populations increased from 24 animals released in 1859 to about 600 million within 100 years, causing great damage and environmental destruction.

In Australia, various methods have been tried to manage the rabbit plague. For many years, poisoned baits have been widely used. Mechanical destruction of warrens is also considered effective. The most successful approach has been the introduction of two virus diseases. The Myxoma virus causes tumors and can kill rabbits quickly. It is native to South America where it infects local rabbit species and was introduced into Australia in 1950. It was also introduced into Europe. The virus caused dramatic declines in rabbit populations, from an estimated 600 million to about 100 million in Australia. Since the 1970s resistance to the virus has become more and more common. A second virus causing the rabbit hemorrhagic disease was discovered in China in 1984. It spread accidentally to Europe and again caused large scale population declines, to the point that in Spain the decimated rabbit populations now threaten indigenous specialist predators like the Spanish imperial eagle, Aquila adalberti, and the Iberian lynx, Lynx pardinus. In Australia, this virus was tested under quarantine conditions, but escaped quarantine in 1995, again killing millions of rabbits.

The rabbit lives in colonies of about 25 individuals and constructs extensive burrows, up to 3 m deep and 45 m long. Dry and sandy areas are preferred. In many regions, hunting (for its meat and fur) is the most common way of controlling rabbits and the main reason they have been introduced into other countries.

Compared to the European hare, Lepus europaeus, the European rabbit is smaller (around 40 cm long excluding the tail) and also has smaller ears (6-8 cm). The colour is grayish brown to reddish brown. There is a more reddish area at the back of the neck and the belly is lighter. It typically has 5-6 litters per year, each with 3-6 young rabbits.