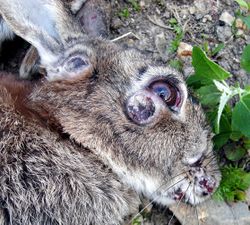 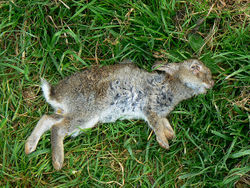 dead rabbit in the U.K. which apparently died of myxomatosis (click on image to enlarge it)
Author(s): Brian Robert Marshall
Source: Wikimedia Commons

The virus occurs naturally in rabbits of the genus Sylvilagus in the Americas. It has been used successfully as a biocontrol agent against the European rabbit, Oryctolagus cuniculus in Australia (released 1950) and other countries. Common symptoms are swellings and lesions around the eyes.

In Australia the estimated rabbit population decreased from 600 million to 100 million within a few years. The disease incidence has since declined however, due to the development of host resistance and the evolution of attenuated strains.

The disease is transmitted through contact, mosquitoes and fleas. In rabbits with no or little resistance, the virus can cause death within a few days.

The virus is a member of the genus Leporipoxvirus of the family Poxviridae. The particles are large, around 270 x 130 nm and morphologically similar to the poxvirus. It has a 163 kb, double-stranded DNA genome.