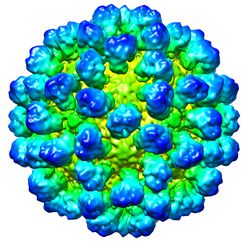 The virus is a member of the Caliciviridae, about 40 nm in diameter, with single stranded RNA (7.4 kb) and cup-shaped structures on its surface. It was first reported from China in 1984, but has now a world-wide distribution. It reached Europe in 1986 and North America in 2000. It has causes high mortalities and large epidemics among European rabbits.

The virus was imported into Australian quarantine for studies as a possible biological control agent against rabbits. However, it escaped the laboratory in 1995 and quickly spread through the continent, often killing more than 90% of the rabbits. The disease was deliberately (and illegally) released in New Zealand in 1997, suppressing rabbit densities by more than 90% (see Parkes et al. 2002). The virus is transmitted through contact and can be excreted by predators like foxes in their feces. Rabbits often do not show external signs of the disease, but die within a day or so.

Around 2004, rabbit populations in Australia and New Zealand began to recover especially in cool humid areas, apparently due to the development of genetic resistance to the disease. Epizootics still occur regularly, but now affect mainly young rabbits (Mutze et al., 2014). The closely related, but benign "rabbit calicivirus Australia 1" (RCV-A1) occurs in the wild rabbit populations of these areas. It is suspected that the RCV-A1 antibodies inhibit RHDV spread as well as reduce disease severity and mortality (cross-protection).