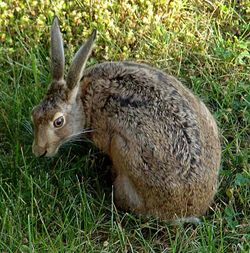 L. europaeus is native to many parts of Europe and some adjacent parts of Asia. However, it was introduced (mainly for hunting) into the U.K., Sweden, New Zealand and some parts of Australia and the Americas. It lives in grasslands and causes some damage to field crops. Further, it feeds on the bark and branches of young forest and fruit trees, e.g. see Suchomel et al. (2019) for damage on apple trees. In some of the areas it has been introduced, it is replacing other competing species like the mountain hare (Lepus timidus) in Sweden or Ireland (Caravaggi et al., 2017).