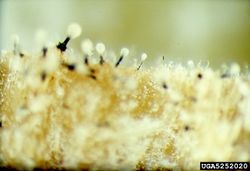 The fungus is an aggressive and lethal pathogen of elms (Ulmus) (see also Ophiostoma ulmi and O. himal-ulmi) which has destroyed billions of elm trees since its appearance. Its origin is unknown and it appeared in Europe and North America in the 1940s, causing serious epidemics. Although it is now widely distributed, it is still spreading in some areas, e.g. to the Swedish island of Gotland in 2005. It is transmitted by elm-infesting bark beetles like Scolytus multistriatus or Scolytus schevyrewi.

The conidia are produced in sticky masses and attach themselves to the cuticle of the bark beetles when the fungus is present in the beetle galleries. When a contaminated beetle infests a healthy tree, the fungus infects the new host, establishing itself in the xylem vessels, producing toxins and eventually killing the tree.