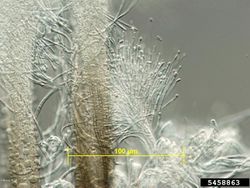 This fungus was introduced into Europe, probably from Asia, around the turn of the 20th century and has caused serious losses among elm trees. It subsequently spread to North America and was first recorded there in 1928. The disease incidence declined later, but flared up again through the introduction of the related (and more pathogenic) Ophiostoma novo-ulmi from Eastern Europe starting in the 1940s. It is transmitted by elm-infesting bark beetles.

Symptoms of O. ulmi emerge in early summer and appear as clusters of wilting or yellowing leaves that turn brown and fall. As the disease progresses throughout the tree, mixtures of healthy and diseased foliage appear. Die-back of shoots follows and ultimately susceptible elm species will die. O. ulmi affects mainly the xylem, and dark brown streaks can be seen when cutting the wood of infected trees.