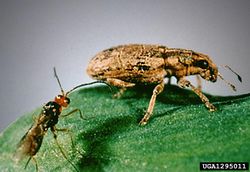 This wasp is a parasite of weevils and was introduced into North America and Australia against Hypera postica and Sitona species, as well as into New Zealand against Sitona discoideus.

The species is an idiobiont endoparasitoid which lays its eggs into adult weevils. During hatching, the eggs release a first instar parasitoid larva but also numerous free floating extraembryonic serosal cells which subsequently develop and differentiate into teratocytes. These teratocytes are believed to assimilate host metabolites for later ingestion by the developing parasitoid larva.