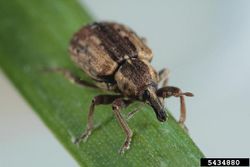 The weevil is native to Europe and neighbouring regions. It has been recorded from North America since 1904 and from Japan since 1982. It attacks alfalfa and other legume plants (like birdsfoot trefoil and vetches) and is particularly damaging to seed crops.

Eggs are laid into the stem of an alfalfa plant. The 1st and 2nd instar larvae feed inside the terminal shoot while the last 2 stages feed on the leaves. Eventually they construct a cocoon at the base of the plant for pupation. The adults are around 5-7 mm long, basically light brown with a broad, central dark brown stripe running along the back that narrows on the elytra.

For reviews of this pest see Pellissier et al. (2017) and the BugwoodWiki.