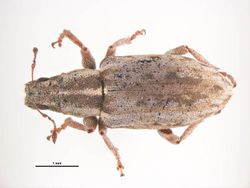 This weevil is native to the Mediterranean region. It has been introduced into several countries outside its native range: Australia (first record 1954), New Zealand (first record 1974), Chile and U.S.A. (first record 1983), and Argentina (first record 2018). For details on these introductions see Del Río et al. (2019). In these countries, it has become a pest of alfalfa/lucerne. The larvae of the weevil feed on the root nodules of alfalfa, causing yield losses of up to 40%. In New Zealand, S. discoideus was brought under control in a classical biological control program, using the parasitoid Microctonus aethiopoides, which was introduced from Morocco in 1982.

The adult weevils emerge from the soil in spring and the beginning of summer. After a period of feeding, they are capable of flying and move to aestivation sites, where they do not feed for 7-8 weeks, but become sexually mature. They then return to lucerne fields, resume feeding and lay eggs in the soil. The larvae feed on the root nodules and pupate the following spring.