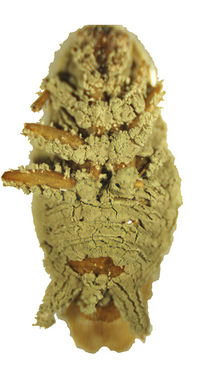 The fungus is considered to be a common entomopathogen with a very wide host range. Molecular analyses have shown that it represents a species complex which includes some common, related and morphologically very similar species (Bischoff et al. 2009).

The species in this group are important biological control agents. Infections start when conidia come in contact with a suitable host, germinate and penetrate the cuticle of the insect. The fungus uses enzymes like proteases, lipases and chitinases to degrade the cuticle. Inside the host, it multiplies and eventually kills the host. The fungus then re-emerges through the cuticle and produces a layer of new, greenish conidia on the surface of the insect.

Note:
In view of the relative recent recognition of M. acridum and M. majus as separate species and the specialization of these two species on locust/grasshoppers and scarab beetles respectively, all older literature records previously assigned to M. anisopliae strains infecting locust/grasshoppers or scarab beetles have been moved to those species.