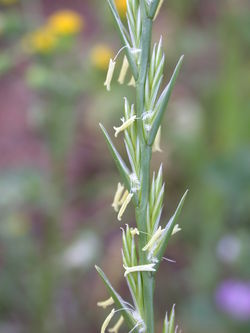 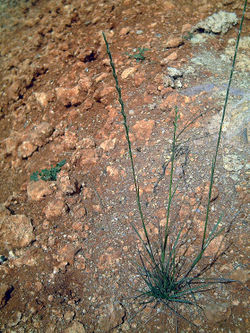 The grass is an important weed in cereals like wheat and in other crops, especially in countries where it has been introduced as a forage grass. It is believed to be native to southern Europe, northern Africa and western Asia but is now grown in many countries in pastures. It forms dense stands of up to 200 plants per m2 which produce up to 45,000 viable seeds per year. When it emerges before the crop, it becomes an aggressive competitor, causing up to 50% yield losses. In addition, it can host cereal diseases like take-all or ergot. Most seeds are short-lived but some can persist in the soil for several years. Herbicides are widely used, but resistant populations are common. Other management options include burning residues after harvest, harvesting before the weed seeds mature and inversion ploughing in suitable soil types (deep ploughing to bury the weed seeds at a depth where they cannot germinate).

L. rigidum grows to a height of up to 1 m. The inflorescence may be up to 30 cm long with up to 20 spikelets, each having 3-9 flowers. The seeds are relatively flat (1 mm wide) and about 5 mm long. The plant has a wide ligule, long auricles (appendages at the collar) and the emerging leaf is folded. The base below the ground is often reddish.