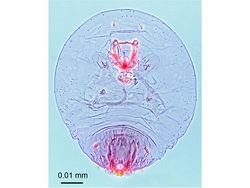 This genus of armoured scales has a world-wide distribution and includes more than 30 species. These infest various woody plants, in particular fruit trees. The scales have an approximate circular or oval shape and are moderately to strongly convex. Reproduction is mainly through parthenogenesis, that is by females laying unfertilised eggs. Hemiberlesia lataniae and H. rapax are widespread and polyphagous pest species.