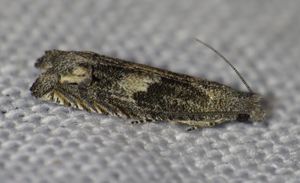 This is a small moth with a wingspan of around 15 mm. It is native to North and Central America and has been introduced into various other countries, often deliberately as a biological control agent against the weed Parthenium hysterophorus. It is now widely distributed. The weed Ambrosia artemisiifolia and some other Asteraceae are also attacked.

The female lays eggs on the leaves and a newly hatched larva first mines the leaf. Later it bores into the stem of a shoot and induces a gall in which it develops. The moth is considered an effective bioagent against the Parthenium weed. However, its relatively wide host range has been causing concern. For a discussion on possible non-target effects see McConnachie, 2015.