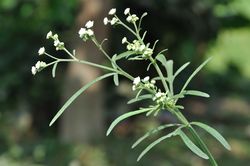 The species is a herbaceous, annual weed, native to the neotropics, but introduced into other tropical and subtropical regions. It affects grazing lands, arable fields and orchards. Various biological control agents have been introduced in different regions or are being studied for possible introduction.

Yield losses of more than 50% have been reported, e.g. in sorghum, and annual losses to the cattle industry in Australia have been estimated at 22 million AUD in the early 1990s. In addition, pollen pose a health risk to people living close to infestations.

The weed grows in a large variety of habitats, apart from cropping areas. It produces many seeds, on average around 40,000 per plant, and these disperse by wind, water or during farming operations.