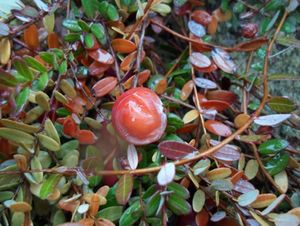 This fungus is believed to be indigenous to temperate areas in North America, but has been reported from several countries in Europe. It causes canker, dieback, twig blight and fruit rot on blueberries and cranberries.

Infections typically start at the tip of the woody shoots (twig blight) and then spreads down the vascular system, causing canker and killing the twig. Leaves, buds, and fruits also become infected with fruits becoming brownish red, inflated and shiny. The fungus persist on the dead twigs until the coming year when it spreads again to healthy plants.