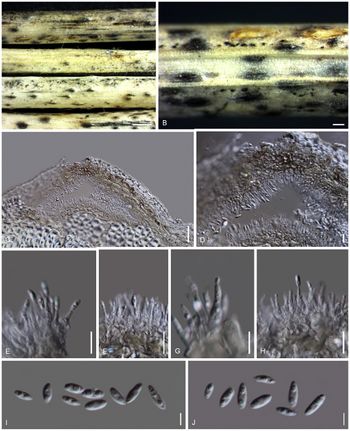 The genus has a world-wide distribution and contains important plant pathogenic species. Other forms may be endophytes, saprobes or human pathogens. On crops a number of species cause diseases like root rot, dieback, cankers, leaf spots, blights, decay or wilt. Stored fruits may be also affected.

The asexual forms have been described under the genus Phomopsis. The sexual stage is characterized, among others, by immersed ascomata, unitunicate asci as well as hyaline and 1-septate ascospores. The asexual stage has ostiolate conidiomata (pycnidia), producing up to 3 types of hyaline and aseptate conidia.

Previously, morphological characters and the host range of the species have been used for identification, but this has been replaced by using DNA sequences. For example, sequences for the complete nuclear ribosomal internal transcribed spacer regions (ITS) and/or partial sequences of actin, ß-tubulin, calmodulin, histone H3, mating type genes as well as the translation elongation factor 1-alpha are being used.

Economically, the most important crop pathogens include:

For other species see the list below. For species infecting weeds see Diaporthe (weed pathogens).

The following species are currently entered under Diaporthe (genus):