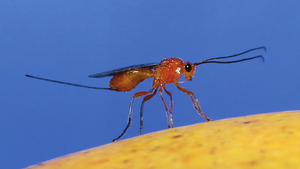 This species is an important solitary larval-pupal endoparasitoid of various fruit flies. It has a long ovipositor that can reach older larvae inside the fruits. It is native to southern Asia and has been frequently used in classical biological control programs against fruit flies. For example, it was introduced into Hawaii and the Americas, e.g. into Brazil in 1995. Following such introductions it is now widely distributed.

The suitable hosts include Ceratitis capitata, Anastrepha spp. and the oriental fruit fly (Bactrocera dorsalis). D. longicaudata can also be reared easily for mass-releases, e.g. by using irradiated fruit fly pupae or other stages. After such mass-releases, reductions in trapped Anastrepha of 50% and more have been recorded.