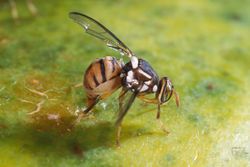 The fruit fly is a serious pest which attacks a variety of tropical fruits, e.g. mango, guava, avocado and papaya. The natural distribution is southern Asia. It has spread, through infested fruits, to the Hawaiian Islands in 1947 and to other Pacific islands. Since 2003 it is reported from Africa where it has been referred to as Bactrocera invadens until 2015. After its introduction, it spread quickly throughout sub-Saharan Africa.

The species was eradicated from some Pacific islands and from Japan (1986). Infestations are also regularly detected in California (e.g. see Barr et al., 2014) and Florida, U.S.A., where the species is controlled by eradication campaigns and quarantine treatments.

The life cycle lasts about 2-3 weeks. Pupation occurs in the soil. The introduction of parasitoids, like Fopius arisanus and Diachasmimorpha longicaudata has been quite successful in Hawaii.

The adult is about 8 mm long. The thorax is dark brown with light markings. The abdomen is yellowish, with 2 horizontal black stripes and a central longitudinal stripe from the base of the 3rd segment to the tip of the abdomen.