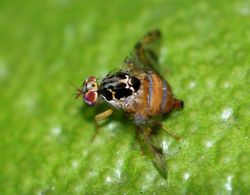 The medfly is a major, polyphagous pest of fruits which is native to the Mediterranean region, Africa and parts of Asia. It has been accidentally introduced into other regions through the transport of fruits and is now wide-spread. Several introductions into the U.S. mainland have been successfully eradicated and because of the frequent introductions, a strategy of regular preventive releases of sterile male flies has been adopted in California.

The economic significance of this species includes the losses caused by the fruit fly itself, plus the substantial quarantine efforts (and costs) undertaken in countries free from this species (e.g. mainland U.S.A.).

When the female lays its eggs into the ripening fruit, bacteria and fungi are also introduced and accelerate the decay. In particular citrus, mango, coffee and guava are attacked. The adults are 4-5 mm long. The life-cycle from egg, over the 3 larval stages to the mature adult lasts about 1-1½ months. Mature larvae leave the fruits and pupate in the ground.