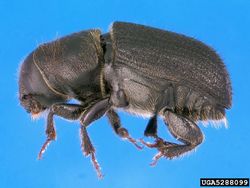 The bark beetle is a serious pest of pine trees in western North-America. It attacks live, especially stressed pine trees. Interior hybrid spruce (Picea glauca × engelmannii) is also attacked occasionally. Larvae and adults feed on the phloem and bark of the host trees. The adults also carry 2 species of symbiotic fungi (Ophiostoma montium and Grosmannia clavigera) which infects the attacked trees, cause blue-stain in the wood, and serve as nutrient supplement for the larvae.

In the past, the beetle has periodically reached outbreak status. For example, outbreaks were recorded from the late 1970s to the mid 1980s and again from around 2000 to around 2010. The 2nd outbreak has been unusually severe and affected millions of hectares of pine forest, often with more than 50% of the trees being killed. In British Columbia alone, the cumulative damage until 2012 was estimated at 18 million hectares infested and 700 million cubic meters of killed timber. Outbreaks are characterized by the synchronous emergence of adults during a suitable time of year which can overwhelm defenses of the host trees. Weather patterns are suspected to play a role in the outbreaks.

Laboratory studies have indicated that beetles fly over distances of 2-6 km. However, flights of more than 20 km have been observed (see Evenden et al., 2014). Control options are limited. Felling the infested trees to destroy the breeding larvae is very labour intensive. Verbenone has been used as an antiaggregant semiochemical but with mixed results.

Trees are attacked by pairs of females and males which construct a vertical tunnel under the bark in which the female lays its eggs. Each larva then constructs its own horizontal tunnel. The larvae overwinter in the galleries, usually as 2nd or 3rd-instars. There is one generation per year. The adult is 4-6 mm large and black. The pronotum has a slight constriction in the anterior half, but is not curved downwards like in some other bark beetles. The elytra are gradually curved at the end not abruptly sloping like in species of the genus Ips.