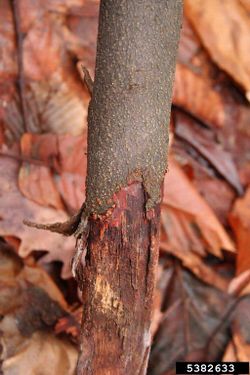 The disease is native to eastern Asia and was first reported from North America in 1904. Large scale epidemics killed most of the American chestnut trees (Castanea dentata) in the subsequent 50 years. In Europe it was first recorded from Italy in 1938, infecting the European chestnut (Castanea sativa) and also caused considerable destruction. It slowly spread through southern and then northern Europe, reaching the United Kingdom by 2011 when only Sweden and Ireland remained unaffected in Europe.

The fungus enters the trunk or the branches through small wounds and colonizes the bark and the cambium. The infection site swells and the bark shows cracks. It quickly spreads around the branch or trunk, killing the bark and forming girdling sunken cankers. Leaves wilt but remain hanging on the tree, even during the winter. Tiny, yellowish pycnidia (300-400 µm) appear on the bark surface which produce an orange winding mass of pycnidiospores (see illustration below). The spores disperse through rain, wind and insects. Reddish, sexual perithecia are also formed inside the bark which release durable, airborne ascospores. The ascospores can spread the disease over longer distances than the conidia. Apart from chestnut trees (species of the genus Castanea) oak trees may also become infected. Horse chestnut (Aesculus) is not susceptible.

Resistant hybrid chestnut have been developed. Since around 1990, several antagonistic hypoviruses have been described. These spread naturally, resulting in the spontaneous recovery of many chestnut stands in Europe. Virus infected strains of the fungus produce smaller cankers which heal after some time. The infected pycnidiospores are white not orange and the virus spreads to healthy fungus strains by contact.

Conidia are oval, straight or slightly curved and approximately 2-3 x 1 μm large. Perithecia are usually formed in clusters of 10-20 and are about ½-1 mm in diameter. Ascospores are elliptical, consist of 2 cells and are slightly constricted at the septum. They are about 10 x 4 µm large, see Senanayake et al. (2017) for illustrations.