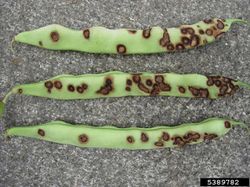 The fungus has a world-wide distribution and causes bean anthracnose which severely reduces the production of Phaseolus beans, mainly in areas with frequent rainfall. Some other legumes like cowpeas or broad beans may also become infected. In particular, pods and seeds are affected and the disease often spreads through infected seeds. Dark brown to black lesions develop on the lower side of the leaves and on pods. Infected plants are stunted and produce fewer seeds with dark spots and of an inferior quality. Infected seedlings may die. Often, the disease results in yield losses of more than 50% on susceptible cultivars.

Under moist conditions, the lesions produce reddish spore masses. The spores are airborne, spread to neighbouring plants and can cause epidemics. The fungus persists mainly on infected pods and seeds, but may also survive for some time on other plant debris and in the soil under cool conditions. On air-dried seeds, kept at 4° C, spores are still viable after 5 years. Management involves the use of resistant cultivars and pathogen-free seeds. In infested fields, plant debris should be removed by tillage. The use of fungicides is usually not economical.

Acervuli are 200-300 µm large, pale brown and hemispherical, with setae. Conidia are pink to rust-coloured, one-celled, cylindrical and about 15 x 5 µm large. The sexual stage has been observed in cultures only. Perithecia are about 150-200 µm large. Ascospores are elliptical, approximately 10 x 4 µm in size.