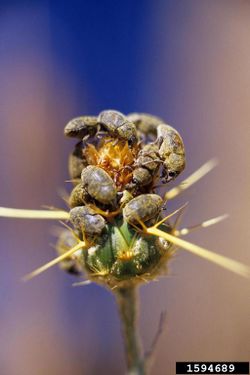 The order of Coleoptera contains more species than any other insect order, among them many species which are specialized on certain weeds and are considered important biological control agents.

Several beetles have been deliberately introduced into countries to help suppress invasive plants. For example several species of Aphthona have been successfully introduced from Europe into North America against the invasive and toxic weed leafy spurge, Euphorbia esula. Many species are leaf-feeders but others attack flowerheads or seed. Some are also stem or root borers.

Note:
This page refers to biological control agents only, for other groups of Coleoptera see:

The following families of Coleoptera containing weed bioagents have been entered into the system: