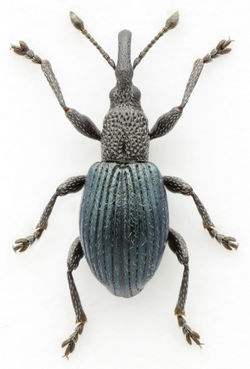 This family has been described as a group of 'primitive weevils'. Among others, they have straight antennae, not elbowed like in some other weevil groups. Some live in wood or are damaging to crops (see the Brentidae as crop pests), but others are of interest as biological control agents of weeds. This page deals with the latter group.

The subfamily Apioninae includes more than 2,000 species of plant feeding weevils. It is sometimes regarded as a separate family the Apionidae. The species of Ceratapion are specialised thistle feeders and some are useful natural enemies of invasive thistles. The adults are typically pear-shaped and small, only a few mm long. The abdomen is broad and rounded while the pronotum is narrow with almost parallel sides.

The following genera and individual species are currently entered as weed bioagents under this family: